Templating Counter Tops – Why templates are always the way to go! 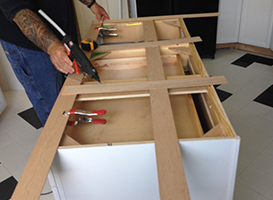 What exactly is templating a counter?

It’s a critical step in any kitchen, bath, bar  or other renovation which includes installing a granite, marble, soapstone, quartz or other custom material counter top.   Renovating any room in a house is always a process with distinct steps which get you from start….to finish.   These counters are cut from enormous slabs of stone or quartz, shipped straight from the quarry where they were mined…or the factory where the quartz was created.   It is critically important when a “stone fabricator” is creating custom stone counters, that the “templater” first comes to the site and creates exact templates for every counter.  That is the first step in creating the beautiful counter top that every home owner wants once they’ve made the decision that stone, marble or quartz is what they want adorning their cabinets!

Some pictures from a recent kitchen renovation done by GreenRose Design, of Glen Ridge, NJ,  illustrate some of the steps in the process. 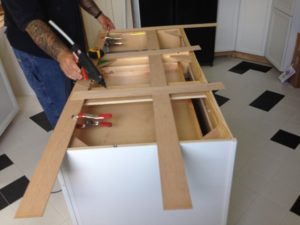 In this picture you see the template being created for an eventual quartz counter top on a kitchen island.  The strips of wood are similar to balsa wood, but a little more sturdy.  Still…easily cut, the person making the template starts by using a strip along the “front” edge, which he then clamps in place with (the red) clamps you see in this picture. He uses a hot glue gun to glue the wood strips in the exact position required to create an exact template which is sturdy enough to get back to the factory and be used as the cutting guide for the fabricator.

From the front edge, which will have about a 1.5 inch overhang….he first clamps the wood strip exactly where the counter will eventually sit. Those clamps insure that the strip won’t move as he works.  Then, cutting strips to size and gluing them in place, he works back towards the other side of the “island” , which will have an overhang for seating.  The part of the island closest to the bottom of the picture will also have an overhang for seating and that’s why the two long strips hang way over the edge of the base cabinet. 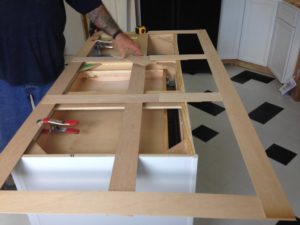 Here you see the completed template for the quartz counter to be built. You can see the over hang on the two sides of the island.

You can see the template for the island counter (above).  This way, the exact dimensions and shape of the counter will be perfectly fitted to the base cabinets and kitchen layout, exactly as the home owner wants it!  This particular counter will have a 3 inch rounded radius at each of the 3 corners where there is an overhang corner and a one inch radius at the one corner (top left) where there is no overhang. 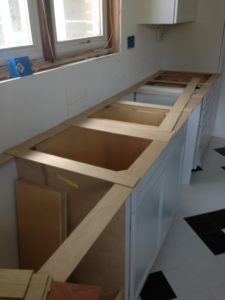 This counter (above) will be one long counter which sits over two dishwashers, flanking a large kitchen sink. 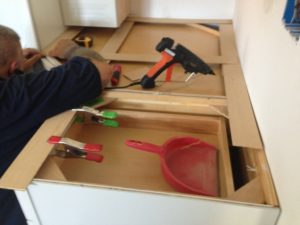 You may be thinking….why go to all that trouble?  Why not just measure the base cabinets and give the dimensions you want to the fabricator?   The answer lies in the fact that there is no situation in which everything is perfectly square….it’s virtually impossible.  The finished counter will be enormously heavy and must be perfectly cut to exactly fit the space for which it is intended.  To attempt to create a stone or quartz counter WITHOUT a template is just asking for trouble. And by having the stone fabricator send their template person, if there is any mistake….its theirs!  But you rarely see that happen!

In this next picture, you see the template being created for a corner counter.  Here is a perfect example of why you MUST TEMPLATE before cutting the stone!   As you can see, because the wall along the right side is curved in two places along the run, the man creating the pattern has already used two pieces of wood (it will require 3 to completely trace the bow in this particular wall).  Without tempting, the counter would never be cut perfectly and then never sit fully flush against the wall!

Below you can see the finished template, which required 3 strips of “balsa” to capture the profile of the house’s imperfect wall! 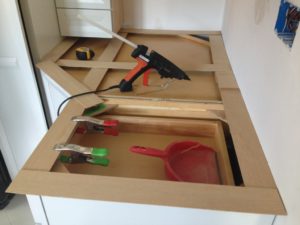 Now, the templates for the four counters in this kitchen are off to the stone fabricator where they will guide the quartz cutters to create the perfect counters.  Stay tuned and we’ll soon show you how that turns out!